Bradley Cooper, can I be your guitar teacher?

The new film A Star is Born begins with the perfect energy; The atmosphere is charged with excitement. The camera follows the band members as they take the stage. The guitars and drums start to roar. It’s definitely one of the greatest opening scenes for guitar and rock lovers. But then we see Bradley Cooper air-guitaring the solo…

Cooper (the director and lead actor) acts well, has all the right rocker moves down and uses believable guitarist gestures. But alas – his fingers are not synchronised with the sound. In films, sometimes actors do in fact play their own instrument while shooting a scene but the editor might use different takes which could mismatch the visuals to sound. However, in one of his interviews, Cooper revealed that indeed it wasn’t him playing in the film. Although he sang and recorded all the songs live (and did it well), the guitars were played by Lukas Nelson (the son of Willie Nelson).

In other parts of the film, it is obvious/clear that Cooper does know what he is doing when he holds the correct chords and changes them at the right time. One article mentioned that Cooper learned guitar for 18 months in order to prepare for the part. He may well have, but the opening scene with its unconvincing guitar solo tells a different story.

After teaching hundreds of students, I can attest that playing guitar and even guitar solos isn’t such a difficult task for most people, if they apply themselves. I believe that any beginner is able to play this opening scene’s solo after taking guitar lessons consistently (weekly) for a few months. And I’m willing to bet on it 🙂

Many actors play guitar in Hollywood

He wrote music, he sang live – the picture could’ve been complete if only he had taken on the guitar playing. There are many actors and directors who do play guitar in Hollywood and beyond (I taught a few myself). I know it’s not my place to say, but theoretically other actors who are known as accomplished guitarists could have played the role more easily/believably. Johnny Depp, Kevin Bacon, Russell Crowe, Steven Seagal, Jeff Bridges?

Maybe it’s not that important. But as a guitarist who knows that there are a lot of other guitarists who will watch this film, it doesn’t feel like there is a need to fake it.

Since I’ve published this post, many people still ask:

Which Electric guitar does Bradley Cooper plays on A Star is Born?

Well, apparently it is a Gibson 1964 ES-345 Bigsby Mono Varitone Semi-Hollow. Colour: Olive Drab. If you want to purchase exactly the same guitar, that might be difficult. Unless Gibson will decide to reissue those guitars with Cooper’s signature? (I’ll take some shares for that idea Gibson, thank you). But you can find some variations of that model in different colours here on eBay. 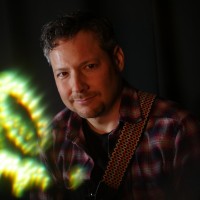 I am a guitarist with 25+ years of experience, a music composer (film composer, theatre, dance, etc.), session player and I’m in the final stages of working on my second album of original guitar compositions. I also teach guitar lessons in north London (Crouch End, Highgate area) and online via Skype / FaceTime with a focus on creativity. I also occasionally write columns for magazines like Guitar World, Guitar Player and for my own guitar blog: https://udiguitar.com/guitar-blog